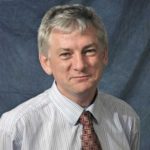 Rationale: Sequence-specific and precisely folded oligomers of β-amino acids (β-peptides) provide a general and facile approach to the synthesis of organic nanostructures with well-defined shapes and precisely controlled patterns of surface chemistry. The level of control, which goes beyond that which has to date been possible with inorganic nanostructures, carbon nanotubes, dendrimers and other nanoscopic states of matter, provides unique opportunities to study processes of assembly directed by sequence-controlled, nanoscopic chemical patterns.

Mission: Thrust 2 is exploring directed assembly on the nanoscale through the synthesis of these biologically-inspired organic nanostructures in which functional side-chains display unique ordering, in terms of both sequence along a backbone and three-dimensional arrangement in space. The thrust seeks to understand the functional properties of these nanostructures, including biological activities, as well as to understand how the nanoscopic chemical patterning of these organic structures can be exploited to direct their assembly (with and without external fields and flow) into organized materials.

Long Term Goals: Key goals of Thrust 2 include elucidation of mechanical and thermophysical properties of individual β-peptide-based nanostructures and their sequence-dependent interactions at the single nanoparticle-level with surfaces, biological interfaces, inorganic materials, and small molecules. The Thrust also seeks to unmask rules that govern collective assembly processes involving nanostructures that possess precisely defined nanoscopic patterns of chemistry on their surfaces, and to develop fundamental insights into sequence-directed properties of β-peptide-based nanostructures that lead to selective biological activity.

Context within the Center: Thrust 2 is focused on the development of new principles for the synthesis and directed assembly of organic nanostructures. Similar to Thrust 1, research in Thrust 2 seeks to understand how surface nanopatterns of chemical functionality can direct assembly processes leading to functional nanostructures. In common with Thrust 3, these sequence-directed assembly processes span multiple time and length scales, and are directed by both sequence-defined internal and applied (hydrodynamic; interfacial) external fields. Thrust 2 further contributes to the theme of directed assembly through the use of β-peptide nanostructures as templates to direct the assembly of inorganic nanomaterials. Toxicity of β-peptide based particles is evaluated in Thrust 4.