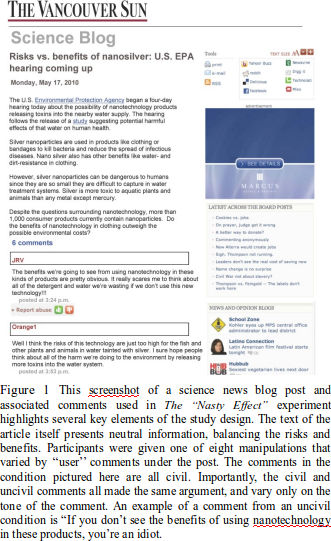 The Societal Implications group has pioneered research on how new media environment influences audiences’ perceptions of new technologies. Notably, the research group’s recent study “The ‘Nasty Effect’” shows that when exposed to rude blog comments on a news article about an emerging technology, audiences’ risk perceptions are polarized based on an individual’s religiosity and support of the technology in question. A neutral science news story, like that used in this study (see figure for example), which presents respondents with a balance of risks and benefits, is interpreted differently based on particular heuristics a reader is employing, and, this study suggests, depending on the level of civility in the article’s comments. This research has a wide range of impacts, from significantly affected online-commenting policy decisions made by online science news organizations like Popular Science, to being incorporated into two University of Wisconsin-Madison courses in the Department of Life Sciences Communication (LSC): LSC 875: Science and Social Media, a graduate seminar; and LSC 100: Science and Storytelling, an undergraduate introductory course.
LSC 875: Science and Social Media is being taught for the first time in Spring 2014, and the significance of this study was one of the driving forces behind the creation of this course. The course draws directly from The “Nasty Effect” research when exploring how social media are impacting science in society. The instructors for LSC 100: Science and Storytelling, which includes a graduate student member of the Societal Implications research group, incorporated The “Nasty Effect” research into the curriculum for the first time in the Fall 2013 semester. The students learn about the theoretical basis for the study, the study design, and the results, and they discuss the implications of the findings for communicating science in new media environments. Second, the news cycle of The “Nasty Effect” –from online publication, to news articles and blog posts covering the research, to a New York Times op-ed written by two of the co-authors, to coverage in a parody newspaper—provides the course instructors with a prime opportunity to discuss how research is disseminated, and the different rhetoric involved used by different media outlets.