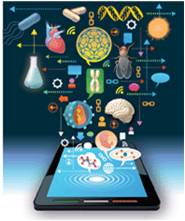 Nine in 10 internet users in the United States turn to search engines to find information (1), and 60% of the U.S. public seeking information about specific scientific issues lists the Internet as their primary source of information (2). This has created a new urgency for scientists to pay attention to these trends and to the emerging scholarly literature about communicating science in this brave new “online” world.

Among the U.S. public, time spent on the World Wide Web has been linked to more positive attitudes toward science, even when controlling for use of traditional mass media such as newspapers and television (3). For instance, frequent Web users are more likely to report in surveys that they support basic scientific research even if it may not have immediate societal benefits. Research suggests that the availability of science news from the Internet may inform U.S. audiences with different educational backgrounds. In other words, online science sources may be helping to narrow knowledge gaps caused partly by science coverage in traditional media that tends to be tailored to highly educated audiences (4). Unfortunately, equivalent data for other countries is not available yet.

Recent communication research, however, has also identified at least three areas in which the new realities of an online information environment will increasingly force scientists and social scientists to rethink the interface between the science community and the public. One area is science journalism. The rise of online media since the late 1990s has come at the expense of traditional mass print and broadcast media. Less space has been allocated for scientific issues, even to the complete elimination of science coverage in some outlets (5). Today, audiences turn more and more to blogs and other online-only media sources for information about specific scientific issues and much less to online versions of traditional news outlets. Almost half of Americans currently rely on nontraditional online sources, and only 12% turn to science news from online content provided by traditional print newspapers and magazines (2).