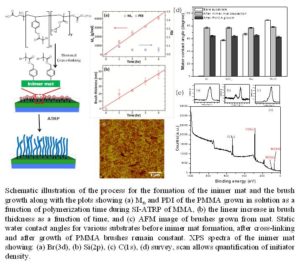 Thrust 1 research has led to the development of a versatile set of chemistries for organic coatings that enable the fabrication of chemical patterns and graphoepitaxial substrates. These materials are now widely used by the block copolymer lithography community. Newer initiatives have been directed towards developing a single component highly functional organic layer that can both direct block copolymer assembly as well grow dense polymer brushes. A highly versatile universal approach was developed to grow polymer brushes from a variety of substrates with high grafting density by using a single component system. A random copolymer which consists of a polymerizable initiator or inimer, copolymerized with a crosslinkable monomer was synthesized by reversible addition fragmentation chain-transfer (RAFT) polymerization.Thermal cross-linking creates a mat that is stable during long exposure in organic solvent. Surface initiated ATRP (SI-ATRP) growth of polymer brushes on the substrate led to a high grafting density of 0.80 ± 0.06 chains/nm2. The inimer containing cross-linkable copolymer can be viewed as a single component ultra-thin polymeric coating which can be applied to a range of substrates to grow high chain density polymer brushes by ATRP. The ease of synthesis, chemical tunability, homogeneity of composition, stability in organic solvents and applicability by simple spin-coating to a wide range of substrates makes this a versatile approach to create functionalized interfaces. The potential for this chemistry is in creating chemical patterns for block copolymer lithography, and a wide range of nanopatterned dual functional nanostructures for designing biointerfaces