Water-mediated interactions involving hydrophobic domains are known to play a central role in a broad range of colloidal and interfacial phenomena, including molecular self-assembly and macromolecular (e.g., protein) folding processes. In the majority of these systems, although polar and charged groups are present in close proximity to the hydrophobic domains, how these proximal groups modulate hydrophobic interactions is not understood. Theories and simulations have predicted these proximity effects to be significant, but the lack of suitable experimental systems has prevented such ideas from being tested. Thrust 3 has recently discovered that the placement of cationic functional groups (e.g., ammonium and guanidinium ions) adjacent to nanoscopic domains of comprised of non-polar amino acids can have a dramatic influence on hydrophobic interactions mediated by the non-polar domains. 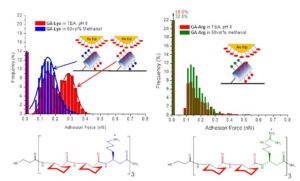