A new 3-Site-Per-Nucleotide coarse-grained model for DNA is presented. The model includes anisotropic potentials between bases involved in base stacking and base pair interactions that enable the description of relevant structural properties, including the major and minor grooves. In an improvement over available coarse-grained models, the correct persistence length is recovered for both ssDNA and dsDNA, allowing for simulation of non-canonical structures such as hairpins. DNA melting temperatures, measured for duplexes and hairpins by integrating over free energy surfaces generated using metadynamics simulations, are shown to be in quantitative agreement with experiment for a variety of sequences and conditions. Hybridization rate constants, calculated using forward-flux sampling, are also shown to be in good agreement with experiment. The coarse-grained model presented here is suitable for use in biological and engineering applications, including nucleosome positioning and DNA-templated engineering. 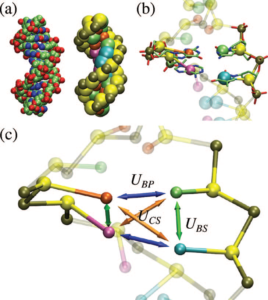