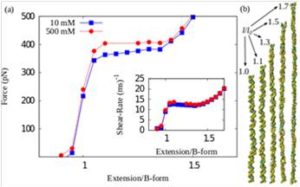 Extension behavior of 3SPN DNA enables calculation of the thermodynamically driven stretching transition. These results show a sequence of stretching simulations performed on a 111 base-pair TaqI digest of λ-DNA at two ionic strengths. (a) The end-to-end distance l, of the sequence is held at various ratios relative to its contour length l0, and the force response is monitored. A distinct transition between standard B-form DNA and a stretched form is observed, characterized by a plateau in the force. The magnitude of the force at this plateau matches stretching experiments. (b) Snapshots of the DNA at different levels of stretch in between 1.0 and 1.7. The model predicts that the phase transition responsible for the force plateau is a hybridization-dehybridization driven by strain. At small values of the stretch, most base pairs remain hybridizedThrust 3 has pioneered the use of optical mapping for high-throughput analysis of genomic DNA. An important discovery by the Thrust is the realization that giant DNA “dumbbells”, produced by trapping the molecules in long nanoslits, can be stretched well beyond the b-form contour length, thereby opening the possibility of constructing optical maps with single nucleotide resolution.